For all bodybuilding aficionados, the day of the “pecs” is the session not to be missed under any circumstances. Often placed in priority in the program, this muscle group does not dislodge the Monday evening slot, this day when all the bench press benches are occupied.

Why, of all the muscle groups we can enjoy building, is the pecs at the top of the list?

Simply because it’s the most conspicuous muscle, the one that gives size to the bust and that you see every morning in your mirror.

Also, “having big pecs” is tacitly the sign that one is hefty , and its level of development spontaneously places you in the silent hierarchy of those whom one looks at and envies.

Through this part dedicated to the pectorals, we are going to give you a brief rundown on the anatomy of this muscle group, on the different exercises to perform to develop it, but also on everything that can prevent them from progressing and finally, how avoid injuries, which can mark the end of your progress.

ANATOMY OF THE PECTORALS: A MUSCLE GROUP COMPOSED OF 2 BUNDLES

Anatomy of the pectorals

The pectorals are made up of two major bundles and a secondary bundle, the subclavian muscle, located just below the collarbone.

\It is located under the pectoralis major. We do not see him. However, it intervenes in everyday gestures and connects the shoulder girdle to the thorax.
It is a deep inspiratory muscle : it allows you to voluntarily increase the volume of the rib cage by forcing inspiration.
It is adductor, antepulsor, depressor and rotator of the scapula. : it allows to bring the shoulder and the arm forward, and to lower the scapula.

It is a powerful muscle that covers the rib cage, from the collarbones to the first ribs. It covers the small pectoral. Its fibers are divided into 3 bundles:

It is, like the small pectoral, auxiliary to breathing (you can voluntarily inflate the chest).
Some authors divide the pectoralis major into 4 bundles, the sternal bundle being divided into two parts: inferior and superior.
The pectoralis major is the internal rotator of the humerus, adductor and antepulsor of the arm.

For the development of the pectorals, we distinguish on the one hand the poly-articular exercises: the basic exercises which recruit the pectorals but also other agonist muscles (the triceps and the shoulders). On the other hand the isolation exercises.

Also, some exercises will better stimulate the upper part of the pectorals and others will solicit the middle or lower part, outside or inside.

STRENGTHEN THE SMALL PECTORAL (TO BE PLACED DURING THE WARM-UP) 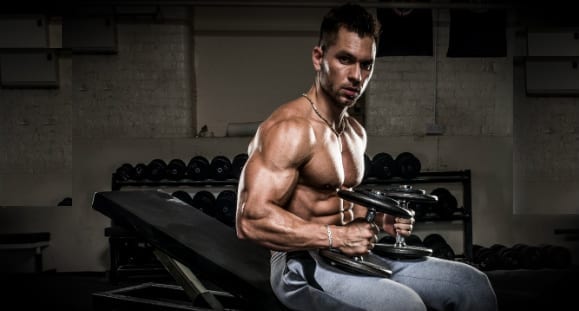 Take a pair of fairly light dumbbells and bring back, arms straight down, shoulders forward, forcing the internal rotation of the wrists. Do 3 sets of 12 repetitions before each pecs session.

ZOOM ON THE “UPPER PECS”

Often it is the upper part of the pectorals, the clavicular part, that is lagging behind .

To make up for the delay and develop the “bulge” of the upper pecs, different options are available to you to expand your sessions.

For example, you can pre-activate the upper zone with a targeted warm-up, with rubber bands for example .

Also, we advise you to pre-fatigue the upper pecs with an isolation exercise such as incline flys with dumbbells or cable vis-à-vis.

The influx of blood caused by this pre-activation will allow this beam to be better recruited during the basic exercise such as lying down or inclined.

THE IMPORTANCE OF FAST FIBERS

Muscles are made up of fibers. There are the slow, enduring fibers which hypertrophy quite little, then there are the fast fibers. It is they who interest us in this subject.

Fast fibers are white, explosive fibers. If your pecs have a high percentage of fast-twitch fibers, chances are you’ll be able to develop them easily.

If it’s the other way around, you’ll have more difficulty developing them.

But don’t panic since slow fibre, with suitable training, can become fast fibres.

It will simply take longer for these fibers to grow.
NB: You should know thathe shape of a muscle is determined by genetics. You can increase or decrease its volume and definition, but you can never change its shape .

During basic exercises such as presses (lying down and inclined), the shoulders and triceps are also recruited.

If one of these two groups is powerful, it will allow you to develop a lot of strength in the movement.

The bar rises easily and with good loads.

Only, if for example the shoulders are too involved in the movement, they are the ones that will provide the first third of the effort: which means that the pectorals will only provide two thirds of the effort. The bar rises but the targeted muscle is not sufficiently stressed.

The same for the triceps. Strong triceps will allow you to provide a lot of force in the bench press, especially in the second part of the movement.

Again, the bar is rising but the pecs may not be recruited enough.
Getting strong on the bench press doesn’t necessarily mean you’ll have big pecs.

Conversely, an agonist muscle that is too weak may prevent you from giving your all on a basic exercise.

If you’re looking to increase your bench press performance, be sure to build strength in your shoulders and triceps as well.
Being “bad” at the bench press doesn’t necessarily mean you’ll never have big pecs.

It is not uncommon to see a member on the bench press on Monday, then Wednesday, then Friday for a final reminder.

It’s a formula that can pay off in the first few weeks of training for a complete beginner, but it quickly becomes the best recipe for overtraining and injury.

A muscle is not built during the workout but after.

Until more than 72 hours later .

If you don’t let the muscle recover and synthesize amino acids to rebuild, you’re dashing your hopes for progression.

Only place pecs reminders in your routine for a few weeks and resume a rhythm of one group per week. Repeat this pattern three times a year.

Tearing the pectoralis major is a common accident in weight rooms. Most often, the muscle tears at the humeral insertion (the “outer” portion of the pectoral), which involves shortening of the entire muscle.

This is a very serious injury that must be operated on as soon as possible if you want to hope to regain proper mobility .

But before the tear, the muscle (and the tendons) can suffer from various more or less disabling lesions.

Contracture is when part of the muscle fibers remain contracted even after exercise. Muscle contracture normally resolves on its own within a few days, provided the muscle is rested.

Alternate applications of ice and heat to speed healing.

It is an inflammation of the tendon but it will only rarely affect the pectoral itself. Usually it is tendonitis of the shoulder, elbow or wrist.

In case of tendinitis, apply an anti-inflammatory cream and ice to the painful area, hydrate yourself more during your sessions and take at least 3g of vitamin C per day.

OUR ADVICE TO AVOID INJURIES

The best advice we can give you to build your pecs to their maximum potential is to not hurt yourself! Here are our top tips for avoiding injury.